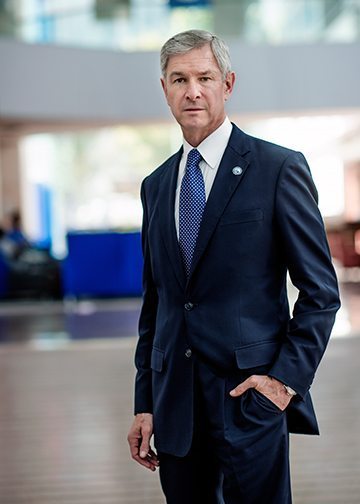 Since beginning his tenure as Georgia State University’s seventh president in January 2009, President Mark P. Becker has pursued an ambitious vision for the future of the institution and has led it into an unparalleled period of growth and advancement.

As a first-generation college student who began his educational career at a community college, Dr. Becker is personally and professionally committed to ensuring that students of all economic backgrounds succeed. In a 10-year period the university’s graduation rates have increased by 22 percentage points. The university has become a widely recognized national leader in the introduction of innovative programs and initiatives to foster student success. It leads the nation in eliminating disparities in graduation rates based on race, ethnicity or income, and as one of the most diverse universities in America, is first in the nation among nonprofit institutions in graduating African-American students.

The university has set records for enrollment, graduation rates and total graduates. Dr. Becker has placed a high priority on ensuring financial support for students, and need- and merit-based scholarship funds distributed by the university have tripled since his arrival. Under his leadership, Georgia State has set fundraising records.

Georgia State’s consolidation with Georgia Perimeter College (GPC) in 2016 brought the university’s student enrollment to more than 50,000, making it the largest university in Georgia and one of the largest in the nation. In mandating the consolidation, the University System of Georgia Board of Regents said it anticipated Georgia State’s highly successful student success initiatives would have a major impact on the performance of students at GPC, a two-year college.

Dr. Becker’s passion for student success has been matched by his commitment to increasing multidisciplinary research and economic development through the creation of new research centers. The Second Century and Next Generation initiatives have focused on hiring teams of senior faculty members. This commitment has brought the university to new heights of research accomplishment, as reflected in university records for sponsored research funding.

Global engagement is another important component of Dr. Becker’s vision for the modern research university. He has positioned Georgia State faculty and students to thrive in an increasingly complex and global landscape, and has worked with faculty leaders and international partners to enhance Georgia State’s global profile. He is particularly committed to developing strong partnerships with universities in rapidly growing economies. The university is strengthening relationships with counterparts in Brazil, China, South Africa, South Korea and Turkey.

Dr. Becker has aggressively advanced the physical development of the university’s Atlanta campus, and Georgia State is widely acknowledged as a major catalyst in the revitalization of downtown Atlanta. The university has made major additions to campus housing and dining, research and academic facilities, and intramural and athletics facilities. In 2010 the university added football to its athletics program, and in 2013 introduced sand volleyball and moved to the Sun Belt Conference to advance into the Division I – Football Bowl Subdivision level of NCAA competition. With the Atlanta Braves’ decision to vacate Turner Field in downtown Atlanta, he led the university’s acquisition and renovation of the stadium that became the home for Georgia State football in 2017. Dr. Becker began a two-year term in 2017 as chair of the Sun Belt Conference Board of Directors.

Trained as a statistician, Dr. Becker has had a distinguished career in biostatistics and public health sciences. For most of his professorial career he was a member of the faculty in the Department of Biostatistics at the University of Michigan, where he also held appointments in the Institute for Social Research and the Department of Statistics. He was made a Fellow of the American Statistical Association and the American Association for the Advancement of Science. Dr. Becker has been principal investigator on research grants from the National Institutes of Health and the National Science Foundation. He has published extensively in leading journals, and his doctoral students have gone on to successful careers in leading higher education institutions and with multinational companies. He has served on numerous editorial boards, was co-editor of Sociological Methodology, and was a guest editor for Sociological Methods and Research and the Journal of the American Statistical Association.

Throughout his career, Dr. Becker has served on boards and committees of civic, government and professional organizations. He serves on the boards of the American Council on Education, the Association of Public and Land-Grant Universities, the Association of American Colleges and Universities, the Atlanta Regional Council for Higher Education, Grady Memorial Hospital Corporation, the World Affairs Council of Atlanta, the Georgia Chamber of Commerce, Georgia Research Alliance and the Atlanta Committee for Progress. He also serves on the executive committees of the Metro Atlanta Chamber of Commerce, Central Atlanta Progress and the Coalition of Urban-Serving Universities.